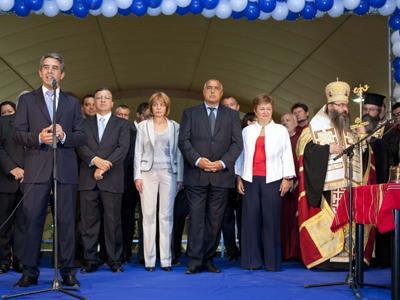 BULGARIA: The first phase of Sofia metro Line 2 opened on August 31, with President Rosen Plevneliev, Prime Minister Boyko Borissov and European Commission President José Manuel Barroso attending the celebrations. Musical entertainment was laid on at the National Palace of Culture, with the public able to take free rides on the new line from 14.00.

The initial 11 km phase of Line 2 starts at Obelya, which is also served by Line 1. It runs to Nadezhda and Tsentralna station, then south through the city centre to Serdika, the National Palace of Culture and James Bourchier in the Lozenets district.

The 11 stations include a city centre interchange with Line 1 at Serdika, where there is an exhibition of archaeological finds unearthed during construction.

Services are operated using three-car Rusich series 81-740/741 metro trainsets with Hitachi electrical equipment which are being supplied by Metrovagonmash. Deliveries started in May and will run to November, with 12 sets allocated to Line 2 and six to the existing Line 1.

Half of the cost of Line 2 has been met by European Union sources, including Cohesion and Operational Programme for Transport funds. The Sveti Naum station has been named 'European Union'. 'Working side-by-side with the Bulgarian authorities, we have together completed this project that serves to stimulate the economy, make traffic safer and faster, and allow for a more pleasant urban life', said Barroso. 'This is what we mean when we talk about green, smart and sustainable growth.'

Planned later phases would extend Line 2 south to Hladinika with two stations, and add a northern branch to Ilijantzi with three stations.

Meanwhile, Line 1 is being extended to the airport, and a third line from Knayevo to Vasil Levski is being studied.