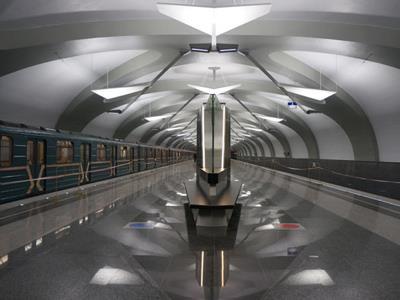 Novokosino is the 186th station on the metro network. It has single vaulted underground hall, with black, grey and white marble and granite cladding combined with coloured ceramic tiles.

The station is designed to be fully accessible, with lifts to platform level. An audible warning of the arrival and departure of trains is provided for the first time.

Construction of the extension began in 2009, having been delayed for more than 10 years because of financial constraints. In September 2010 two Herrenknecht TBMs began boring the running tunnels which are between 10 m and 17 m underground.

The line could be extended a further 7·6 km east to Kozhukhovo and Liuberetskie Polya with four stations, and a western extension from Tretyakovskaya to Mezhdunarodnaya on the Filyovskaya line has been proposed.