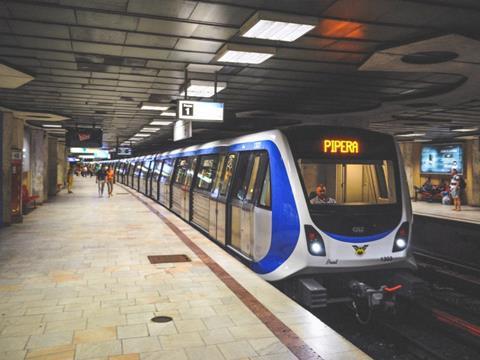 ROMANIA: The first CAF trainset entered service on Bucureşti metro Line M2 this month. By the end of the year the total fleet of 16 is expected to be in operation on the 18·6 km route.

Operator Metrorex ordered 16 six-car trainsets from CAF in November 2011 for €97m. The first four were built in CAF’s Beasain plant; the rest are being assembled in CFR’s Griviţa Workshops in Bucureşti. The trains are stabled at Berceni depot at the southern end of Line M2.

Each trainset is named after a river in Romania. They are 113·6 m long and 3 200 mm wide, with an entry floor height of 70 mm. Each train is fitted with 16 asynchronous 145 kW motors and can run at a maximum speed of 80 km/h. Automatic train protection and automatic train control are installed.

Each train has 222 seats and capacity for 978 standing passengers at 4/m². There are also bicycle and wheelchair spaces, as well as passenger ‘infotainment’ screens.

The trains underwent static and dynamic testing between January and June in order to obtain the certification from the Romanian Railway Authority.

Together with the 42 Bombardier Movia cars ordered in 2000, the CAF trainsets are part of Metrorex’s plan to phase out the fleet of IVA trains, built in 1978-92, from metro lines M1, M2 and M3. They will remain for the time being on the 6·1 km Line M4.