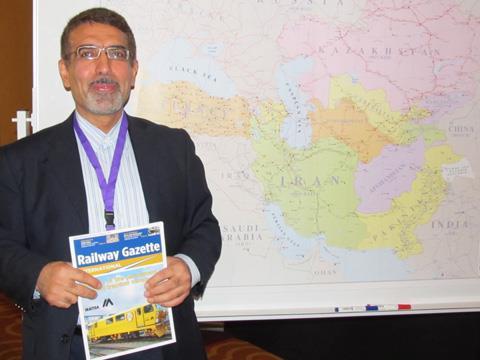 CENTRAL ASIA: The Economic Co-operation Organisation is keen to develop east-west links with central Asia, Director of Transport & Communi­cations Dr Esamil Tekyehsadat has told Railway Gazette International, with a particular focus on providing a standard gauge route from China to the Gulf ports and to Turkey, and thus Europe.

The container service between Islamabad and Istanbul is now running regularly, and a demonstration train from Almaty in Kazakhstan to the Iranian port of Bandar Abbas is planned for October. Rapid progress has been made with construction of a north-south link between Kazakhstan, Turkmenistan and Iran, and their three presidents are expected to open the final 90 km of the route later this year, providing a through route from Russia to the Gulf, albeit with a break of gauge at the Iranian border.

ECO is looking to co-ordinate the plans being developed by various agencies for lines in northern Afghanistan. Iran is currently building a rail link to Herat, China is looking at a line from Kashgar through Kyrgyzstan and Tajikistan to Mazar-i-Sharif, and Asian Development Bank is working on plans for a link to Herat from Mazar-i-Sharif, terminus of the recently-completed extension of the Uzbek network which has been funded by ADB.

ECO is to appoint consultants to look at integrating these into a coherent plan for a 2200 km standard gauge rail corridor between Iran and China, running 1620 km through northern Afghanistan. A feasibility study has put the cost at US$4bn, which Tekyehsadat says is a small sum when set against the economic benefits of the line.

Other plans under development include the often-discussed project to build a railway bypass around Lake Van in Turkey, currently crossed by train ferry.