Midland Metro trams to be converted for catenary-free operation 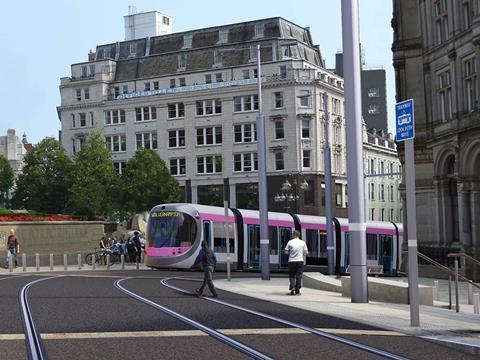 UK: The 21 CAF Urbos trams used on the Midland Metro light rail line are to be retrofitted with batteries to enable catenary-free operation, West Midlands transport agency Centro announced on February 12, and four more trams have been ordered which will be supplied with batteries already fitted.

This will allow catenary-free running on four planned extensions:

Centro estimates the saving from catenary-free operation on the four sections at £650 000, with longer-term savings from avoiding the need to prepare roads or buildings for overhead lines. The proposed Wednesbury – Brierley Hill extension is also being evaluated to identify catenary-free sections.

West Midlands Integrated Transport Authority Chairman Councillor John McNicholas said catenary-free operation had been envisaged when the CAF trams were ordered in 2012, and the contract included provision for retrofitting. Urbos trams fitted with supercapacitors are used in Zaragoza and Sevilla, however, this technology was felt to be unsuitable for the steep hill in Birmingham’s Pinfold Street, while battery technology was not sufficiently developed when the order was placed.

Negotiations are now underway with battery suppliers. The cost has not been finalised, but the Greater Birmingham & Solihull Local Enterprise Partnership will contribute £3·15m and industry association UKTram £1m. The batteries will be fitted on the tram roof and will be recharged from the overhead lines along other parts of the route. They are expected to require replacement at approximately seven-year intervals.