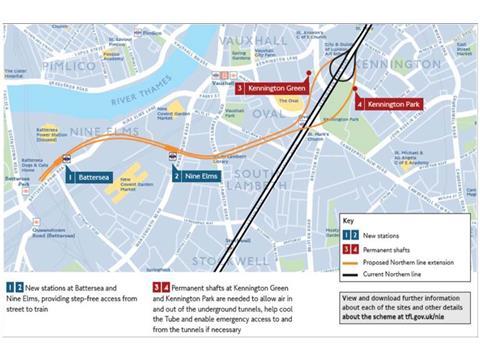 UK: Mayor of London Boris Johnson officially launched construction of an extension of London Underground’s Northern Line on November 23. The 3·3 km extension from Kennington to Nine Elms and Battersea is due to be completed in 2020.

Boring of twin tunnels is due to begin in early 2017 and is expected to take six months to complete. An expected 680 000 tonnes of material would be excavated. A 300 m long conveyor belt will carry 92% of this to the River Thames, from where barges will carry it to Goshems Farm in East Tilbury to the east of London.

In 2014 Transport for London awarded a six-year design-build contract to Ferrovial Agroman Laing O’Rourke. A Transport & Works Act Order was granted in November 2014, giving legal powers for the project to proceed.

The cost of ‘up to £1bn’ is being funded entirely by the private sector through a package agreed between Battersea Power Station Development Co, Wandsworth Council, Lambeth Council, the Mayor and the government, which includes the creation of an Enterprise Zone from 2016 for a period of 25 years. The European Investment Bank is providing a £480m long-term loan.

Once the two-station extension opens, London Underground would increase Northern Line frequencies to at least 30 trains/h. Last year it invited expressions of interest for the supply of five six-car ‘modern equivalent trains’, with options for up to 45 more.