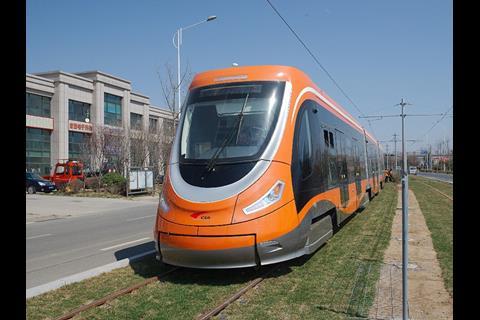 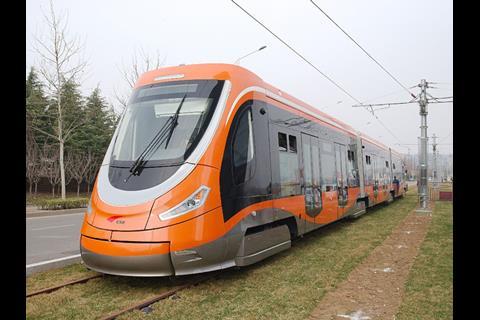 CHINA: Described as the country’s first domestically-designed tram route, an 8·8 km line with 12 stops in the coastal city of Qingdao was opened for revenue service on March 5.

Running from Qianwangtuan to Chengyang Wholesale Market, the 1 435 mm gauge line is the first of three planned routes serving the Chenyang district on the northern side of Jiaozhou bay, northwest of the city centre. The project was approved by the city planning office in April 2013, and construction started in December 2014.

The line is worked by a fleet of seven three-section ForCity 15T trams, which were assembled by CRRC Qingdao Sifang under licence from Škoda. The bidirectional cars are 35·2 m long and 2 650 mm wide, with six pairs of double-leaf doors. Each car can accommodate up to 380 passengers, of which 60 are seated. They are based at a depot near Wang Lu stop close to the eastern end of the line at Qianwangtuan.

Most of the route runs on reserved track, where speeds up to 70 km/h are permitted; only around 400 m is located on street. Services are operated by the Qingdao city bus company. End-to-end journey time is 30 min, with the trams operating from 06:30 to 20:30 each day.

Part of the route has been fitted with 750 V DC overhead electrification, but elsewhere the trams are powered by hydrogen fuel cells. The fuel tank can be recharged in around 3 min.

The start of operations in Qingdao brings the total number of cities in China with tram networks to nine, joining Beijing, Dalian, Shanghai, Tianjin, Shenyang, Changchun, Suzhou and Nanjing. A further 70 networks are currently under construction or planned.