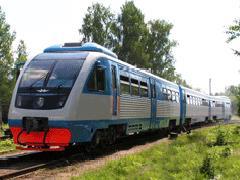 SERBIA: ZS has selected Russian firm Metrovagonmash to supply 10 two-car diesel multiple-units for regional and suburban services. These will form the first of three batches of rolling stock being procured to modernise the national railway's passenger fleet.

The order is being partly funded by a SFr43m loan from Eurofima, and the trains are expected to enter service from 2012.

Other bids had been received from CAF of Spain, TZV Gredelj from Croatia and Slovak firm ZOS Vrútky. Winning the contract 'convincingly demonstrates the relevance of Russia's railway technology, its ability to compete with the products of major manufacturers from the EU countries', said Andrei Andreev, CEO of Metrovagonmash's parent company Transmash Holding.

Metrovagonmash has produced 62 DMUs for Russia, Ukraine, Lithuania, Hungary and the Czech Republic, and is currently delivering 39 three-car RA-2 sets to RZD for Moscow and the North Caucasian Railway.