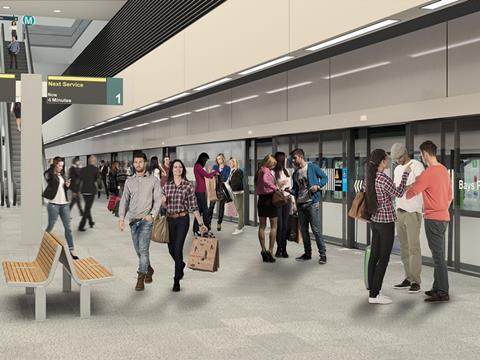 An impression of the planned West Bays Precinct station.

AUSTRALIA: Tendering for the construction of the 24 km Sydney Metro West driverless metro line between the city centre and Parramata was formally launched by New South Wales Transport Minister on Andrew Constance on April 7.

Transport for NSW has invited expressions of interest for the two major infrastructure packages, which cover the boring of around 50 km of twin tunnels between Westmead and The Bays.

One contract will cover the outer section of the route between Westmead and a worksite near the Sydney Olympic Park. The second will cover the section from Olympic Park to The Bays redevelopment zone at Rozelle, 3 km west of the city centre. The authority anticipates that the four tunnel boring machines will start work around the end of 2022,

The city’s second driverless metro line would run entirely underground, linking the Westmead health and education campus west of Paramatta with the central business district, where interchange would be provided with the Southwest metro line now under construction, as well as Sydney Trains suburban services. Offering a journey time of around 20 min between Parramatta and the city, it is expected to double rail capacity in the busy western corridor. Intermediate stations are envisaged at Parramatta, Sydney Olympic Park, North Strathfield, Burwood North, Five Dock and The Bays Precinct, with provision for future stations at Silverwater and Pyrmont.

‘Sydney Metro West is a truly once-in-a-century city shaping project that will forever change how we get around Sydney, said Constance. ‘Now more than ever, infrastructure projects like Sydney Metro West support jobs, communities and the economy.’ The project is expected to create more than 10 000 direct and 70 000 during the construction phase, he added.