Paris Line 6 to get ATO 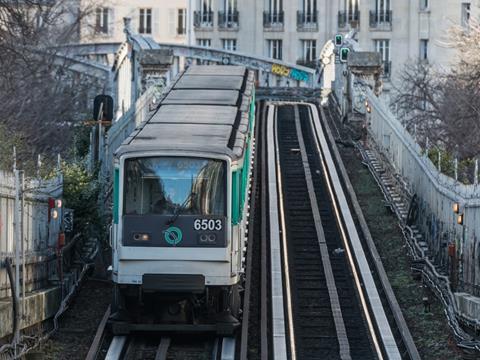 Under a contract announced on April 23, Alstom will supply its radio-based I-CBTC which has already been installed on lines 5 and 9. The company will be responsible for retrofitting 47 Type MP89 rubber-tyred trainsets, which will be cascaded from Line 4 following the automation of that route, together with the related track-to-train radio transmission system.

I-CBTC was developed by Alstom to meet RATP’s OCTYS interoperability specifications (Open Control of Trains, Interchangeable & Integrated System), which were drawn up to ensure compatibility between the ATO systems on various lines, following the signing of agreements with Ansaldo STS, Areva and Siemens in 2004. Interoperable systems have been installed on five lines (3, 5, 9, 10 and 12), while Line 13 has a different ATO system supplied by Thales under the Ouragan programme. Lines 1 and 14 are equipped for driverless operation to GoA4, which is now being rolled out on Line 4.

I-CBTC controls the traction and braking systems for station-to-station operation, with the driver supervising passenger boarding at each station before initiating departure. The OCTYS standards also provide for the fully automatic reversal of empty trains at terminal stations.

I-CBTC onboard equipment has already been fitted to around 130 Type MF01 steel-wheeled trainsets used on lines 5 and 9, and will be fitted to the new MP14 trains being delivered for Line 11 under a contract awarded in mid-2017. According to Alstom, the combined value of the Line 11 and Line 6 contracts is more than €90m.

‘We are delighted that the RATP has once again renewed its trust in our teams and our solutions’, said Patrice Hassib, Vice President of Alstom’s French signalling business. ‘Alstom is again becoming a significant player in the RATP signalling market.’