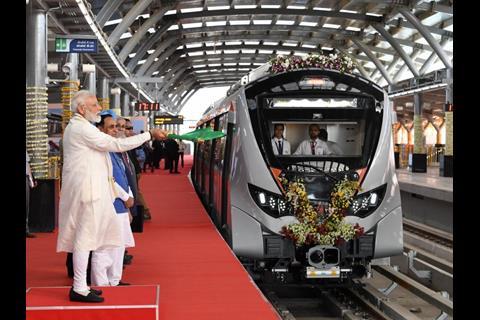 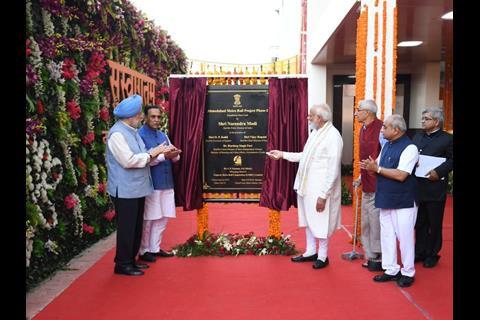 INDIA: The first 6·5 km section of the Ahmedabad metro was inaugurated on March 4 with a ceremony at the eastern terminus at Vastral Gam attended by Prime Minister Narendra Modi and the Chief Minister of Gujurat Vijay Rupani.

The network is being developed by the Gujurat Metro Rail Corp, a special purpose vehicle established in 2014 by the national and state governments to develop a metro network for the neighbouring cities of Ahmedabad and Ghandinagar. Construction of the first phase began in 2015 and is expected to be completed by 2023. The Rs107bn cost is being supported by an Rs60bn soft loan from Japan International Cooperation Agency.

The first phase includes two routes in Ahmedabad which intersect at Old High Court. The 21·2 km east-west Line 1 with 17 stations will run from Vastral Gam to Thaltej Gam, including 6·5 km underground through the city centre. The 18·9 km north-south Line 2 with 15 stations linking the Motera cricket stadium to APMC in Gyaspur will be elevated throughout.

The first section to open is the elevated eastern part of Line 1, between Vastral Gam and Apparel Park, serving six stations. Hyundai Rotem is supplying a fleet of three-car trains which will be based at two depots: Apparel Park on Line 1 and Gysapur on Line 2.

During his visit, Modi also laid a foundation stone for the second phase of the metro, which had been formally approved by the national government on February 19. This will see the network expanded to Ghandinagar at an estimated cost of Rs53·8bn. Line 2 is to be extended north by 22·8 km from Motera Stadium to the Mahatma Mandir conference centre, while a 5·4 km branch will serve the Ghandinagar National Law University and the Gujurat International Fin-Tech City on the east bank of the Sabarmati River.