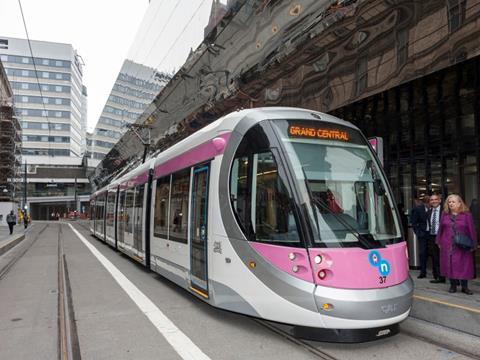 UK: The Department for Transport announced on September 1 that it is to provide £59·8m towards the construction of the Edgbaston extension of the Midland Metro tram route in Birmingham. The package means that the £149m project is now fully funded.

Preliminary work started in the summer on the 2 km, five-stop western extension from Midland Metro’s southern terminus at Birmingham New Street to Edgbaston. Opening is due in March 2021, with up to 10 trams/h in peak times running to the new terminus.

Parts of the route will be built without catenary in order to prevent visual intrusion. To allow catenary-free operation, the fleet of 21 Urbos trams is currently being retrofitted with roof-mounted lithium-ion batteries at CAF’s factory in Zaragoza.