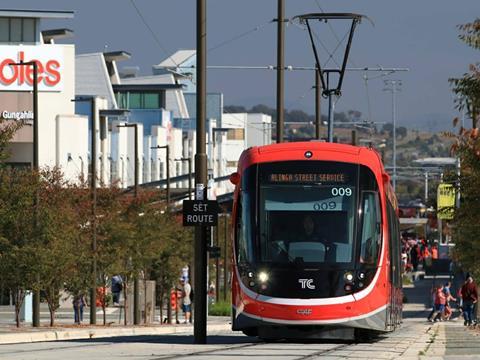 AUSTRALIA: The first stage of the light rail line in Canberra opened to passengers on April 20, with two days of free travel.

Linking Alinga Street in the city centre with Gungahlin Place to the north, the 12 km route serves 13 stops with an end-to-end journey time of 24 min. Services run at peak headways of 6 min and every 10 to 15 min off-peak.

CAF has supplied 14 five-section bidirectional low-floor trams. The 33 m long vehicles have capacity for 276 passengers including 66 seated. CAF will maintain the trams, which are stabled at the Mitchell Depot between Well Station Drive and EPIC & Racecourse stops, for 20 years.

Construction began in July 2016. At the end of the concession the Australian Capital Territory government will take ownership of the assets.

Further phases would extend the tramway south to Woden.