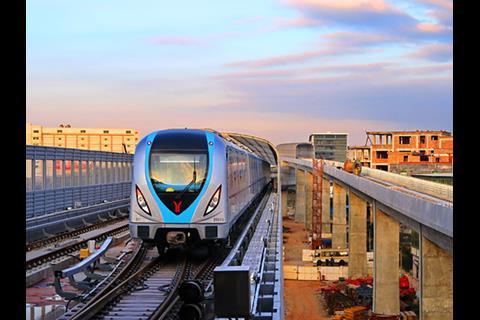 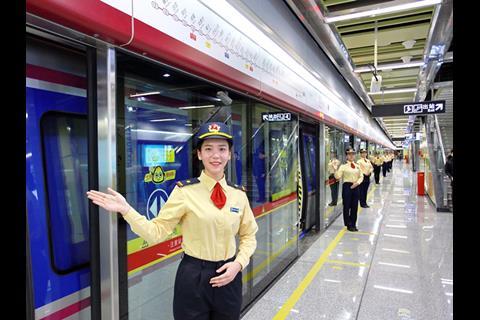 CHINA: Three new metro lines and another extension were opened in Guangzhou on December 28, adding 83·8 km and taking the total network length to 390·6 km. Having opened its first line in 1997, the city now has the country’s third largest network. Four more lines are currently under construction and another has been approved, while 17 further lines or extensions are in the planning process.

Newly opened Line 9 serves the northern district of Huadu, running for 20·1 km and serving 11 stations. Under construction since 2009, it links Fei’eling to Gaozeng, where it interchanges with Line 3. Running entirely below ground, the route also connects with the Wuhan – Guangzhou high speed line at Guangzhou Bei station. The line is operated by 11 six-car Type B trainsets, which are based at Qishan depot west of Fei’eling, and have a maximum speed of 120 km/h. A further western extension is envisaged in the longer term.

The second line to be inaugurated is Line 13, which runs from Yuzhu to Xinsha in the eastern part of the city. Authorised in 2013 and under construction since 2014, the wholly underground line is 28·3 km long with 11 stations, including an interchange to Line 5 at Yuzhu. Line 13 is the first in Guangzhou to be operated with eight-car trainsets. These Type A sets with 3 m wide cars are 186 m long with a maximum capacity of 3 456 passengers, and able to run at up to 100 km/h. The line initially requires 17 trains, which are based at a depot south of Guanhu.

On December 26 work officially began on of a western extension of Line 13, which will run Yuzhu to Chaoyang, adding a further 33·8 km and 23 stations, together with two more depots at Yuzhu and Qinfeng to accommodate an expanded fleet of 81 trains.

December 28 also saw the opening of the Knowledge City Line, which is designated as the first stage of Line 14 but will become a separate branch line once the rest of the line opens towards the end of 2018. The KCL is 21·8 km long with 10 stations, running from the future junction with Line 14 at Xinhe to Zhenlong where the depot is located. Xinhe station is elevated, but the rest of the line is underground. The line is worked by a fleet of 30 six-car Type B trainsets.

When completed, the 75·9 km main section of Line 14 will run from Guangzhou station to Jiekou via Xinhe, serving 21 stations of which 14 will be underground and seven elevated.

The final route to open on December 28 was a 13·6 km southern extension of Line 4 from Jinzhou to Nansha Passenger Port, adding six stations; a separate infill station at Qingsheng was opened on the same date. Initially opened in December 2005, Line 4 is now 56·3 km long with 20 underground and three elevated stations, although a further intermediate station is planned.