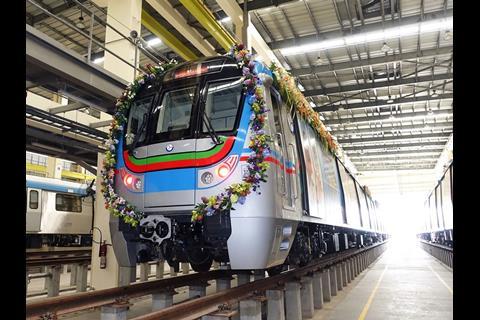 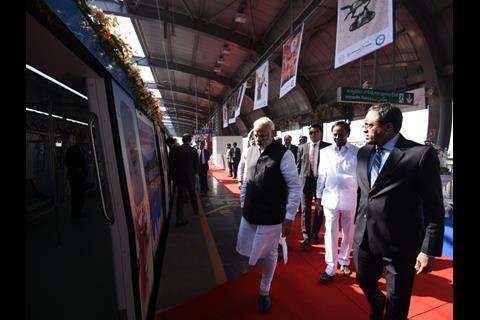 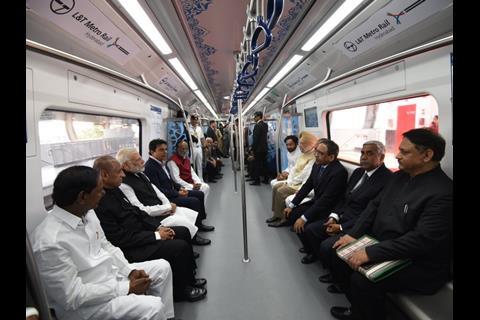 Two lines have opened, which share an interchange at Ameerpet. Line 1 is 12·2 km long and serves 11 stations between Miyapur in the northwest and Ameerpet. The 17·6 km Line 3 links Ameerpet with Nagole in the east, serving 14 stations.

Construction was undertaken under a 35-year DBFOT concession awarded to Larsen & Toubro in 2010. A groundbreaking ceremony was held in April 2012, and phased testing began in August 2014.

Services are operated by Keolis under a €300m operations and maintenance contract running for eight years with an optional three-year extension. Initial services run every 15 min between 06.00 and 22.00 using a fleet of 18 three-car trainsets supplied by Hyundai Rotem. The South Korean manufacturer was awarded an Rs18bn contract in 2012 to supply 57 trainsets for the whole of the three-line Phase 1. Thales has supplied SelTrac CBTC signalling.

When completed, Phase 1 would form a 72 km three-line network. Lines 1 and 3 are to be extended, and a north-south Line 2 would be added.