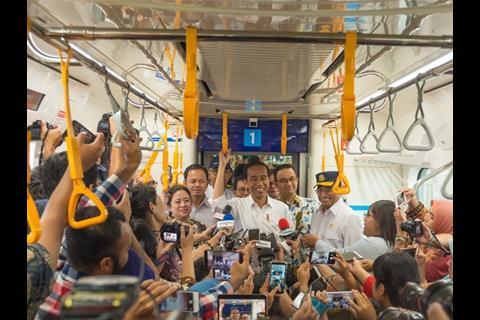 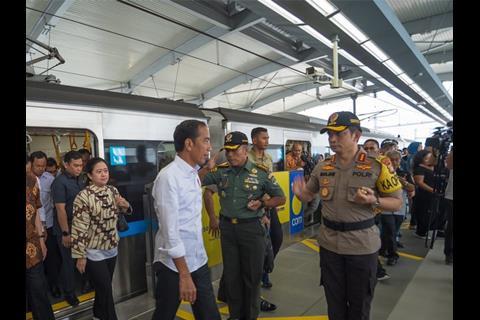 Passenger-carrying tests had been underway since March 12 on the 15·7 km north-south route running from Bundaran HI to Lebak Bulus. The 6 km northern section with six stations is underground, while the remaining seven stations are on an elevated alignment.

The underground section was split into three works packages. The contractor for two of these was a joint venture of Shimizu, Obayashi, Wijaya Karya and Jaya Konstruksi, with the third undertaken by a Sumitomo Mitsui and Hutama Karya joint venture.

The elevated section was also tendered as three segments. Two were built by a Tokyu-Wika joint venture and the third by a joint venture of Obayashi, Shimizu and Jaya Konstruksi.

The Metro One consortium of Mitsui & Co, Toyo Engineering Corp, Kobe Steel and Inti Karya Persada Tehnik supplied railway systems and trackwork, while a consortium of Sumitomo Corp and Nippon Sharyo has supplied a fleet of 16 six-car trainsets under a ¥13bn contract awarded in 2015. The trains have been designed according to the Standard Urban Railway System for Asia specification, developed to promote the export of rolling stock to other Asian markets. The Japanese suppliers have established a railway engineering firm in Indonesia with a local partner.

At the ceremony, Widodo formally launched construction of the next phase. This 8·7 km northern extension will run from Bundaran HI to Kampung Bandan, serving a further eight stations.

Completion is planned for June 2025, and is being funded through a 40-year, ¥70bn loan from Japan International Cooperation Agency.

A second line is also planned. Construction of the east-west route between Cikarang and Balaraja could begin this year.