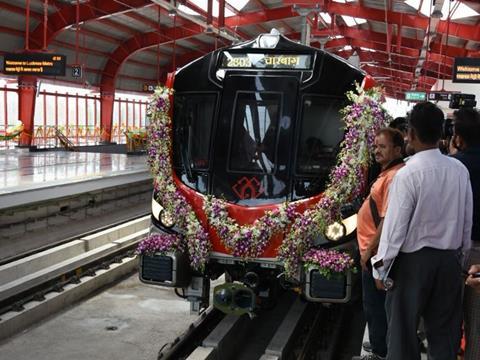 Services are operating between 06.00 and 22.00 on an initial 8·4 km ‘priority corridor’ between Transport Nagar and Charbagh, serving eight stations. When complete, the city’s starter line would connect Chaudhary Charan Singh International Airport and Munshipulia. Three stations on a 3·4 km section would be underground, with the remaining 19·4 km and 19 stations on an elevated alignment.

The project is being developed as a joint venture between the central government and the state of Uttar Pradesh.

In 2015 Lucknow Metro Rail Corp awarded Alstom a €150m contract to provide rolling stock and signalling. Designed in Bangalore and manufactured at Sri City and Coimbatore, the 20 four-car Metropolis trainsets each have 186 seats arranged longitudinally and two areas for passengers with reduced mobility. Alstom’s factories in Bangalore and Saint-Ouen in France are supplying Urbalis CBTC signalling.