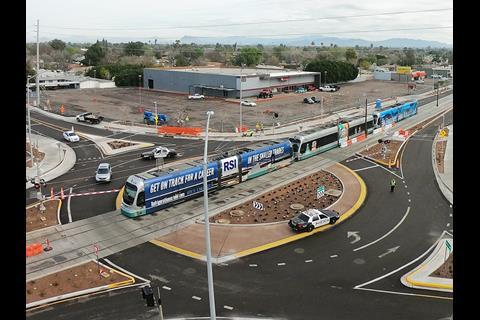 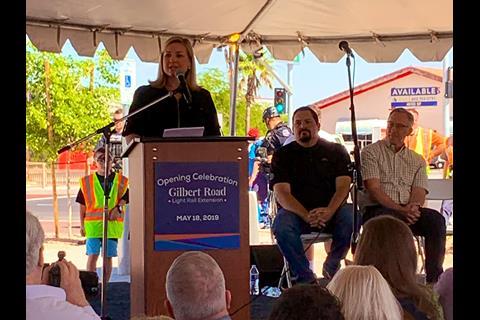 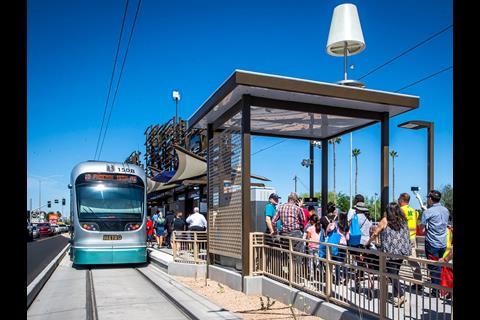 USA: Celebrations on May 18 marked the opening of the 3·0 km Gilbert Road extension of the Valley Metro in Mesa, Arizona. This takes the Phoenix area light rail network to 45 km and 38 stops.

The extension runs along Main Street from Mesa Drive to Gilbert Road, and includes the second roundabout in the USA to be incorporated into a light rail system. There are two stops at Stapley Drive and Gilbert Road which feature ‘whimsical and eye-catching art’, and the terminus serves a park-and-ride site.

A groundbreaking ceremony in October 2016 marked the start of work on the extension, which was built by Stacy & Witbeck and Sundt with a joint venture of WSP and PGH Wong providing programme management, inspection and systems integration services.

The $152m cost was met from federal and local funds. ‘The project team worked with Valley Metro as a cohesive group’, said WSP Office Engineer Mike Sotak following the opening. ‘By negotiating and collaborating early in the project, we were able to reduce construction costs by over $6m.’

‘This light rail extension is another economic engine for the city of Mesa’, said Mayor of Phoenix Kate Gallego at the opening ceremony. ‘Across the Valley, we are excited for light rail to continue expanding.’

Light rail ‘connects people to work, students to school and ideas to communities’, Gallego added. ‘We need more light rail, not just for economic growth, but for our fast-growing community to advance sustainably.’