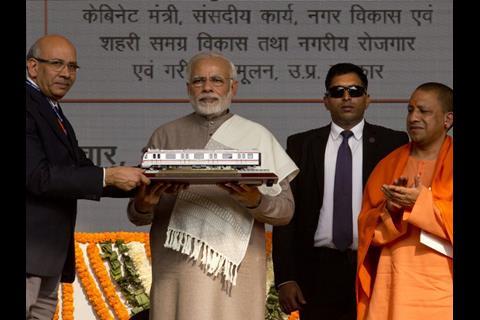 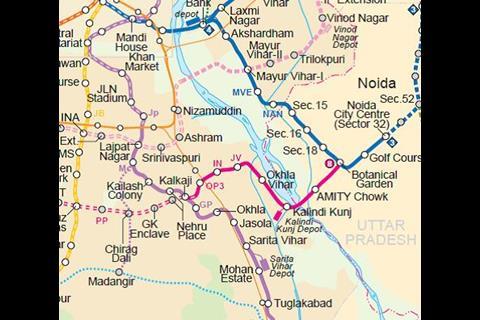 INDIA: The first section of Delhi Metro Line 8 was officially inaugurated by Prime Minister Narendra Modi on December 25, being joined for the ceremony in Noida by Uttar Pradesh Chief Minister Yogi Adityanath and Governor Ram Naik.

One of two fully-automated orbital lines now under construction as part of DMRC's Phase III expansion, Line 8 is also known as the Magenta line. The 12·6 km initial section runs from an interchange with Line 3 at Botanical Garden in Noida across the Yamuna River to meet Line 6 at Kalkaji Mandir.

Serving six intermediate stations, the line offers a journey time between Noida and South Delhi of just 19 min, significantly quicker than travelling via the interchange at Mandi House. The remainder of the route from Kalkaji Mandir to Airport Terminal 1 and Janakpuri is expected to open by March.

Following the opening ceremonies, the VIPs travelled from Botanical Garden to Okhla, where Modi made a speech at Amity University encouraging the city’s inhabitants to use public transport rather than private vehicles in order to reduce environmental impact. Public services began at 17.00 on the opening day.

A fleet of six-car trains has been built for Line 8 by Hundai Rotem, as part of a joint order also covering Line 7. The trains have been designed with removable cabs to facilitate the planned conversion to unattended train operation in the future. The line is being fitted with CBTC to permit headways of 90 to 100 sec, and all stations are equipped with platform screen doors. Trains are expected to operate with drivers for up to two years following completion of the line.