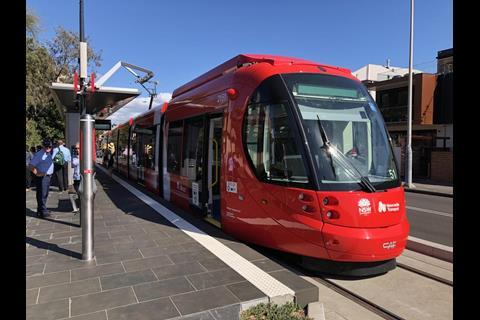 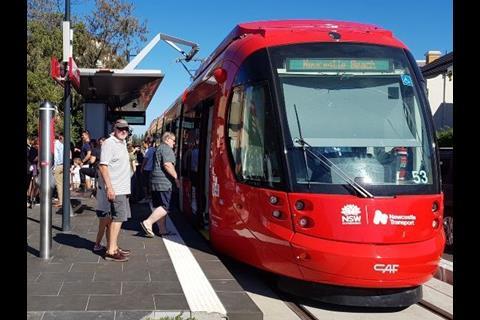 AUSTRALIA: Regular passenger services on the Newcastle light rail line began at 05.05 on February 18, marking the first tram service in the city since the first-generation network closed in 1950.

The 2·7 km route serves six stops between Pacific Park in the east and Wickham in the west, replacing the final section of the railway from Sydney to Newcastle, where services were suspended at the end of 2014.

CAF has supplied a fleet of six five-section low-floor Urbos LRVs. The 33 m long vehicles have capacity for 270 passengers and are equipped with surfboard racks. The vehicles are also equipped with onboard energy storage to permit catenary-free operation, with charging taking place at stops. They have undergone 10 000 km of testing since October, and 14 drivers have been trained.

The line was built by Downer EDI, which is also operating services as part of a consortium with Keolis. The consortium took over the operation of bus and ferry services on July 1 2017. The contract, which also covers light rail services, runs for 10 years.

‘Integrated transport is the most effective way to deliver public transport across multiple modes’, said Keolis Downer CEO David Franks, explain that the operator has ‘redesigned the bus and ferry network around the introduction of light rail to ensure optimal interchange’.

Keolis International CEO Bernard Tabary told Metro Report International that Keolis Downer ‘took over a network designed for a traditional service with typical ridership, and we want to improve the network and encourage public transport’. Among the changes the new operator has made is the introduction of an on-demand service that is bookable through an app.

Tabary says that Keolis Downer is drawing ‘extensively’ on its experience of operating trams in other Australian cities. These include the Yarra Trams network in Melbourne, as well as the G:Link line in Gold Coast.