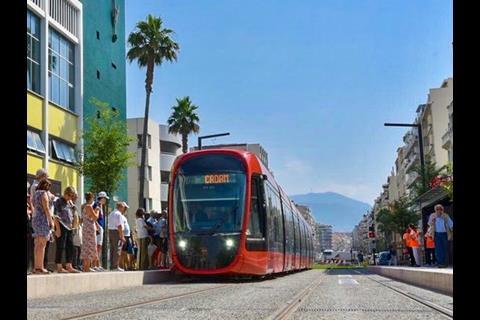 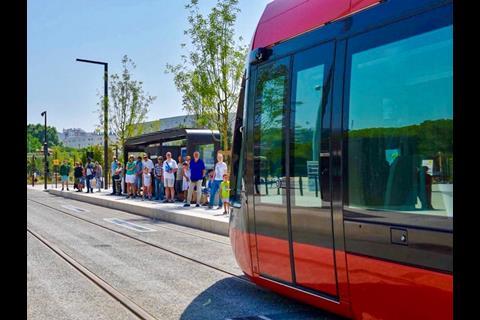 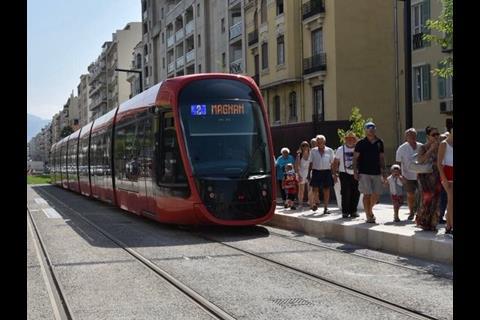 FRANCE: The initial section of the second tram line in Nice was inaugurated on June 30, with a ceremony at the Cadam administrative centre attended by the city’s Mayor Christian Estrosi, as Président of the local Métropole, and the Préfet of Alpes-Maritimes Georges-François Leclerc.

Line T2 will eventually run for 11·3 km from the city’s port district to the Cadam administrative centre and the airport, serving a total of 20 stops including four underground. Trams are initially operating on the western 7 km surface section from Magnan to Cadam.

Following the inauguration, passenger services began operating from 14.00 on June 30. Travel on T2 will be free through the summer season, with 4 trams/h during July and 5 trams/h in August. Revenue services start from September 2, when the frequency increases to 8 trams/h each way.

The short branch to the airport is expected to open by the end of the year, followed in mid-2019 by the initial part of the tunnelled eastern section between Magnan and an interchange with T1 at Jean-Médecin. The final section of tunnel under the old city to Port will open in September 2019.

The surface section of Line T2 has no overhead wires. The Alstom Citadis X05 trams are equipped with Ecopack supercapacitors which are recharged at stops in 20 sec using Alstom’s SRS ground-based static charging technology. The line is the first application of SRS, which is a development of Alstom’s APS ground-level power supply technology.

Alstom is supplying the fleet of 19 44 m long Citadis 405 trams under a €91m contract signed in October 2015. It is also leading a consortium with Colas Rail that has provided the power supply equipment under a separate €11m contract.

The 3·2 km tunnel section under the city centre and the four underground stations are being built by the Thaumasia consortium of Bouygues Travaux Publics, Solétanche Bachy, CSM Bessac, Systra, Colas Midi Méditerranée, SNAF Routes and Garelli under a €270m contract.