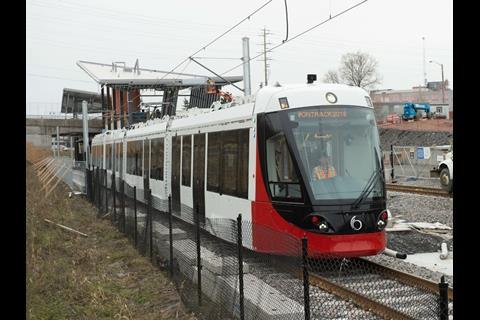 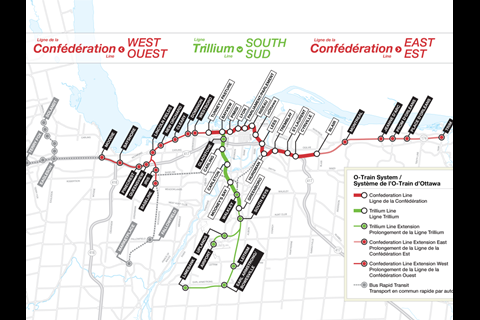 CANADA: Meeting on March 6, the Ottawa City Council formally approved the award of contracts for the O-Train Stage 2 expansion project, which will add 44 km and 24 stations to the capital’s light rail network by 2025.

Now expected to cost C$4·6bn, the Stage 2 package is to be funded by the federal government, the Province of Ontario and the City of Ottawa. The work has been split into three separate contracts, covering the eastern and western extensions of the Confederation Line, a southern extension of the DMU-operated Trillium Line, and the procurement of additional rolling stock and depot facilities.

The 8 km north-south Trillium Line is to be extended south from Greenboro to Riverside South, with a branch to Macdonald-Cartier International Airport, adding 16 km and eight stations. The TransitNEXT consortium led by SNC-Lavalin has been selected as preferred developer to design, build, finance and maintain this extension, which is provisionally costed at C$600m and expected to open in 2022.

The C$2·5bn DBF contract for the Confederation Line extensions has been provisionally awarded to the East West Connectors grouping of Kiewit and Vinci. The 12·5 km eastern extension from Blair to Place d’Orléans and Trim will add five stations in 2024, while the western extension to Moodie Drive with a branch to Algonquin will add 15 km and 11 stations when it opens in 2025.

Rideau Transit Group and Alstom signed an MoU in 2017 covering the supply of 38 Citadis Spirit LRVs for Stage 2 at an estimated cost of €200m, increasing the total fleet to 85 vehicles. A batch of Stadler Flirt DMUs is to be procured to operate the expanded Trillium Line.

‘The approval of Stage 2 of O-Train is an important step forward for Ottawa as we near the one-million population mark, ensuring that future generations are well-served by world class public transit’, explained Mayor Jim Watson. According to the city council, the completion of Stage 2 will put 77% of Ottawa’s residents within 5 km of a station. The network would have a design capacity of up to 24 000 passengers/h per direction at peak periods.