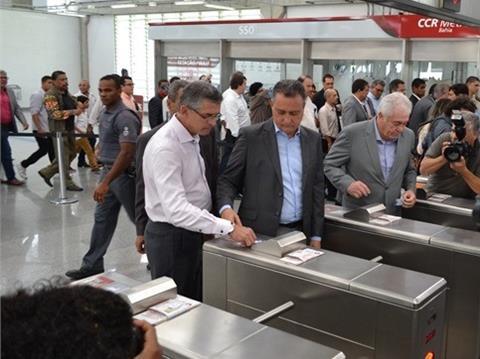 BRAZIL: The initial section of the second metro line in Salvador opened on December 5. The first 2·2 km phase of Line 2 links Acesso Norte on Line 1 and Rodoviária, with an intermediate station at Detran.

The initial section of Line 2 serves an area that is home to 150 000 people. As on Line 1, services on Line 2 operate between 05.00 and midnight, taking 3 min to complete the journey. Construction of the three stations started between February and July 2015. Each station features LED lightning and recycled rainwater for use in the toilets, as well as 50 to 100 bicycle parking spaces. Step-free access is provided at all three stations, and by July 2017 work to install tactile flooring at Detran and Rodoviária is expected to be completed.

When completed, Line 2 will be 20 km long with 12 stations, running between Acesso Norte and the airport. Work on the rest of the line is 80% complete, and passenger services on the Rodoviária – Pituaçu section are expected to begin in July, with the remainder of the line due to follow by the end of 2017. In the longer term, a planned extension to Lauro de Freitas would add 3 km and one station.

Trial operation on a section of Line 1 began in 2014, with full revenue service between Lapa and Pirajá commencing in May 2016.