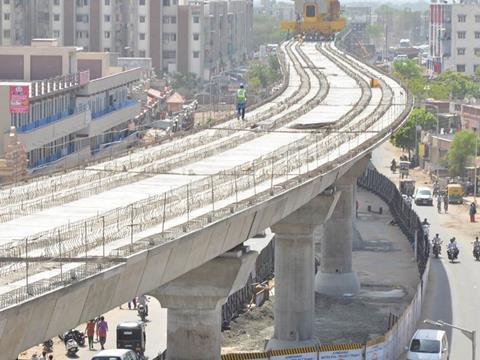 INDIA: The Gujarat government has approved the detailed project report for the second phase of the Ahmedabad metro. This would add 34·6 km to the two lines currently under construction as part of Phase 1.

Delhi Metro Rail Corp prepared the report for two elevated routes, which would cost an estimated Rs67·6bn to build.

Phase 2 includes an 18-station extension of Line 2 north from Motera to Gandhinagar. A third line would also be built under a PPP model between Gujarat National Law University and Gujarat International Finance Tec-City, serving six stations.

Work on Phase 1 began in 2015. This includes two lines that would intersect at Old High Court station. The 20·5 km Line 1 would serve 17 stations between Vastral Gaam and Thaltej Gaam. Line 2 would run on a 17·2 km north-south alignment between Motera Stadium and APMC with 15 stations.