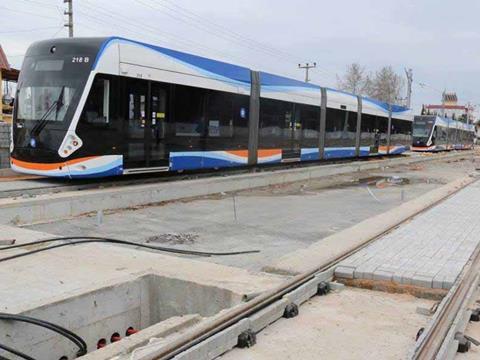 TURKEY: Testing on the next light rail line in Antalya began on January 25, after the completion of the route’s first stage four days earlier.

The 11 km first phase has been built in 1½ years at a cost of TL700m. It will run from Varsak in the north to Otogar in the west, where interchange will be provided with the existing east-west Antray light rail line.

Work is underway on the second phase. This would take the route further south from Otogar to Müze, which is currently the western terminus of the heritage tramway. This route is to be upgraded to light rail standards and double-tracked to become part of the new light rail line, with through running between Varsak and Zerdalilik in the city centre. This would create a 23 km route serving 39 stops.

Antalya Municipality plans to purchase a total of 47 light rail vehicles to operate the route. Of these, 20 would be required for the first phase. The rapid depreciation of the lira caused the initial tender to be cancelled, and the rolling stock for the first phase has since been retendered.

As a result of this delay, testing on the line is taking place using four LRVs borrowed from the east-west route. These were supplied by the Eurotem joint venture of Hyundai Rotem and Tüvasaş in 2016 as part of an order of 18 for the opening of the eastern extension to Expo 2016 and the airport.