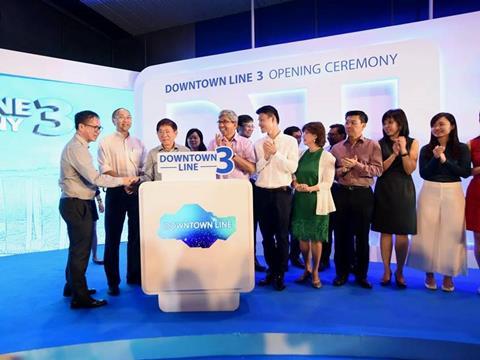 SINGAPORE: The third phase of the Downtown Line opened on October 21, linking Chinatown with Expo in the east, following a ceremony the previous day.

The 21 km underground extension with 16 stations brings the Downtown Line to 41·9 km serving 34 stations. Interchange with the East-West Line is provided at Expo.

The first 4·4 km stage of the driverless line opened in December 2013 between Bugis and Chinatown, followed by a 16·5 km extension north from Bugis to Bukit Panjang two years later.

A 2·2 km extension is planned to open in 2024 from Expo to Sungei Bedok, where interchange will be provided with the future Thomson-East Coast Line.

The latest extension includes the Tai Seng Depot. Located between Ubi and Kaki Bukit stations, this is an extension of the Kim Chuan Depot, which also stables Circle Line trains.

The capacity of the Gali Batu Depot at the northern end of the Downtown Line is due to be enlarged by 2019 from 42 to 81 trains. Downtown Line trains will also use the East Coast Integrated Depot, which will be shared with the East-West Line and Thomson-East Coast Line. This is planned to open in 2024.