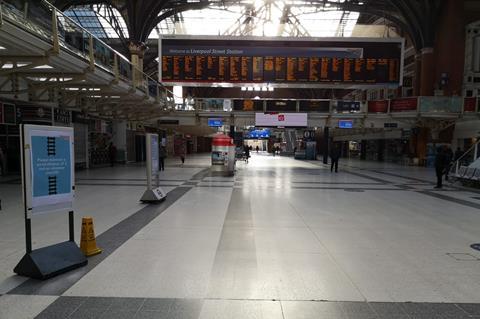 UK: Train operating companies have been reporting a marked improvement in performance on normally congested routes, following the significant reductions in passenger services to provide only a basic ‘key workers timetable’ during the coronavirus pandemic.

Following several weeks where punctuality had broadly returned to normal following the disruption caused by extensive flooding across the UK in February, performance began to improve as the timetables were thinned out.

Introduction of the emergency timetables on March 23 brought a steady improvement in punctuality over the first week and a daily Public Performance Measure score of 100% just a week later. Continuing high scores and several further days with 100% PPM have since been recorded, with industry insiders suggesting that these have validated many existing sectional running times and basic timetable planning rules.

Reflecting on what has been called ‘an experiment that could never have been carried out’, some insiders have suggested that the results seen in the past two weeks reinforce the often-repeated belief that running high-intensity services on congested infrastructure has been a key factor behind the general decline in train performance over recent years. On the busiest routes, many timetable paths included minimal margins for recovery, while station dwell times did not allow sufficient time for large numbers of passengers to alight or board.

Some days in recent weeks have seen lower levels of performance. These have been linked to infrastructure issues, although Network Rail has been working hard to maintain its infrastructure despite the social distancing rules now in place. In some instances, train operators have struggled to resource crews as self-isolation and coronavirus infections have taken their toll on the number of staff available for work.

Industry data does show that on the 100% days a small number of trains may not have met their notional PPM targets but there were not enough late trains to bring the national average down to 99%.