UK: The first of 90 Bombardier Transportation Class 701 Aventra electric multiple-units ordered for operation on South Western Railway’s commuter routes into London Waterloo has been delivered to Eastleigh ready for the start of certification testing next month.

The 10-car EMU was hauled from Derby on June 10 by GB Railfreight, with further units to follow in the coming months. 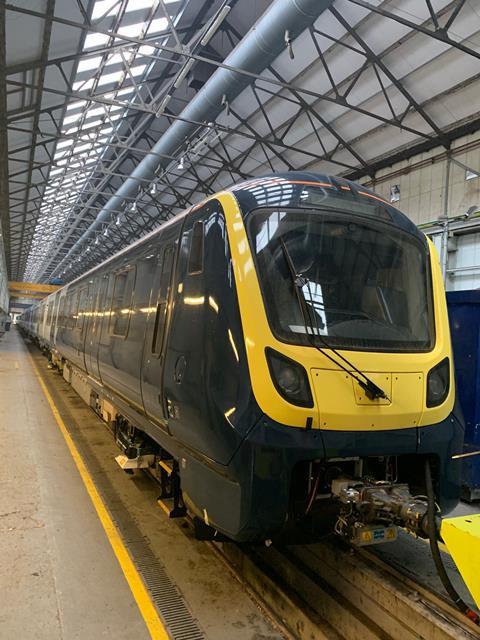 ‘We’re entering an important phase of the project as we begin real world testing on our network ahead of the trains entering passenger service later this year’, said SWR’s Commercial Projects Director Alex Foulds. ‘We’ve been working hard with Bombardier to ensure that these trains are fit and ready to transform journeys for suburban passengers.’

The £895m contract for Bombardier’s Derby plant to supply 60 10-car Class 701/0 EMUs and 30 five-car Class 701/5 units was announced by SWR’s parent companies FirstGroup and MTR Corp in June 2017. The order for a total of 750 cars has been financed by leasing company Rock Rail and partners SL Capital and GLIL Infrastructure, with debt provided by a consortium of UK, European and North American institutional investors.

The 750 V DC third-rail EMUs feature wi-fi, at-seat charging points, real-time information screens, air-conditioning and wide gangways and doors. They are designed to be capable of 160 km/h operation, and are equipped for regenerative braking and with AWS/TPWS as well as ETCS. Unlike the suburban EMUs inherited by SWR, they are fitted with toilets.