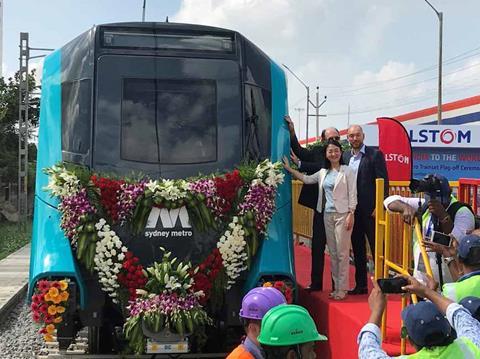 AUSTRALIA: Alstom has rolled out the last of the 22 driverless Metropolis trains that it is supplying for the Sydney metro at its Sricity factory in India.

Alstom is supplying 22 six-car Metropolis driverless trainsets, together with Urbalis 400 communications-based train control, Iconis control systems and Smartlock 400 computer-based interlocking under a €280m contract awarded in September 2014. Alstom’s Bangalore site was responsible for the designs, and the first train arrived in Sydney in September 2017. Dynamic testing on the route started earlier this year.

The first stage of the metro is due to open next year. It will run for 23 km from Chatswood to Epping over a converted heavy rail line, then continue through a new 15·5 km twin-bore tunnel to emerge onto a 4 km elevated alignment, terminating at Cudgegong Road in Rouse Hill. The City & Southwest phase from Chatswood to Bankstown via the CBD is now under construction and expected to open in 2024.