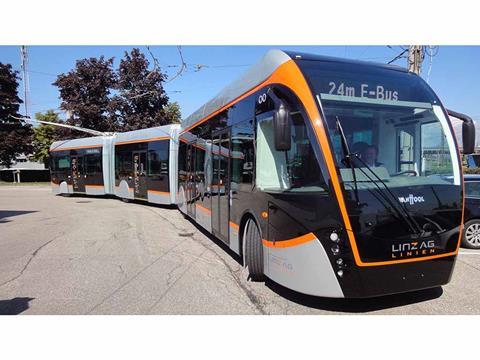 Linz Linien ordered 20 Exqui.City buses from Van Hool in 2015. These are due to enter service by the end of 2019, when they will replace the current fleet.

Being built at Van Hool’s Koningshooikt factory in Belgium, the 24 m buses have capacity of 180 passengers. They are powered by two asynchronous motors supplied by TSA. Batteries to allow off-wire operation will be recharged through the catenary using In Motion Charging supplied by Kiepe Electric.

Other features include air-conditioning and an anti-icing system that sprays the overhead lines with antifreeze to reduce ice formation on cold nights.