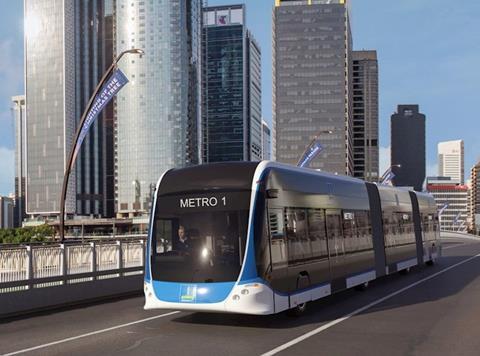 A prototype is due to be delivered next year, ahead testing and series production. Final assembly will take place at Volgren’s factory in Eagle Farm in northeastern Brisbane.

The double articulated low-floor buses will be 24·4 m long and 2 550 mm with four double doors and capacity for 150 passengers. The batteries will be charged at termini using TOSA fast chargers being supplied by ABB. The fleet will be stabled at a depot being built at School Road in Rochedale.

Expected to open in 2023, Brisbane Metro would have two BRT routes with a combined length of 21 km, serving 18 stops. The two routes would share a common section between Mater Hill and Roma Street, where interchange would be provided with the Cross River Rail link, which is due to open in 2024.

One route would run from Roma Street to Eight Mile Plains in the south, while the other would connect University of Queensland Lakes to Royal Brisbane & Women’s Hospital, and would include a second Cross River Rail interchange at Boggo Road.

The project is costed at A$944m, with Brisbane City Council providing A$644m. The remainder is coming from the federal government.