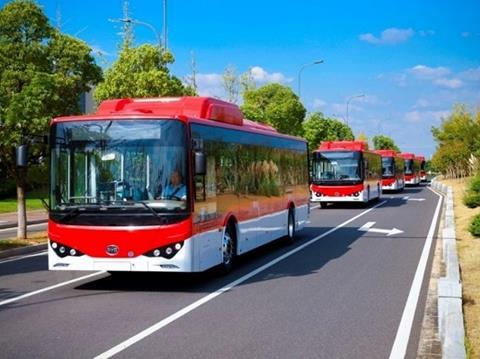 CHILE: BYD has won a contract to supply 183 battery electric buses to Santiago. Deliveries are due to start in August, and the buses will be operated by Metbus.

The buses will have 38 seats, air-conditioning, wi-fi and USB sockets, and will have a range of 250 km. They are to operate along Avenida Grecia, which BYD says would become the first route in Latin America to be operated exclusively by battery electric buses.

Last year BYD won an order to supply 100 K9FE electric buses to Transantiago in collaboration with energy distributor ENEL. When deliveries of the latest order are completed, Santiago will have a fleet of 411 electric buses. According to BYD, this will be the largest fleet of battery buses outside China.

‘We hope that during the next year, electromobility will continue to be strengthened in the capital and in other regions’, said Director of transport authority DTPM Fernando Saka. Concepción is the next Chilean city in line to receive electric buses.