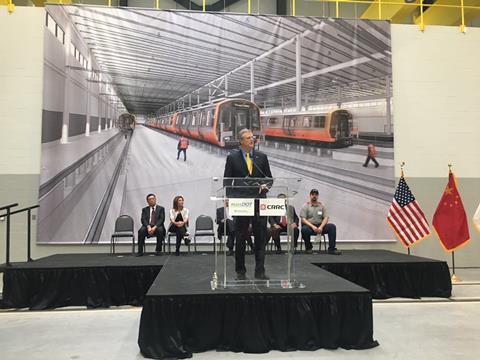 The $95m plant and test track has been built to fulfil a contractual requirement for 60% domestic content in the metro cars that the Chinese manufacturer is supplying to Massachusetts Bay Transportation Authority. A groundbreaking ceremony for the factory at a former Westinghouse site took place in September 2015.

Full production at the Springfield works is planned to begin in early 2018. Series-built cars would be delivered at a rate of around four per month in 2018-21 for the Orange Line and 2019-21 for the Red Line.

The Orange Line rolling stock will replace the existing vehicles and increase the total fleet by 32 cars to enable peak headways to be reduced from 6 min to 4 min.

Based on China’s Type B design, the trainsets will offer capacity for 15 more passengers per car than the existing sets.