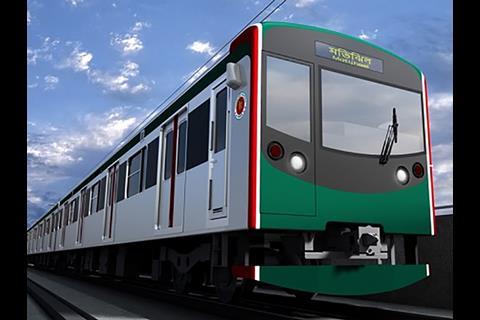 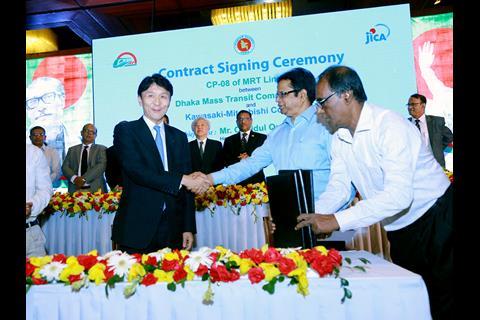 BANGLADESH: The metro Line 6 rolling stock and depot contract was signed by project promoter Dhaka Mass Transit Co and a consortium of Kawasaki Heavy Industries and Mitsubishi Corp on August 6. ‘Metro rail is no more a dream, it is now a reality,’ said Minister of Road Transport & Bridges Obaidul Quader at the signing ceremony in the Pan-Pacific Sonargaon Hotel.

Under the ¥40bn contract CP-08, Kawasaki will be responsible for project management and the design, manufacturing and commissioning of 24 six-car trainsets and major depot equipment. It will also train DMTC operations and maintenance staff, and supervise rolling stock maintenance. Mitsubishi will be responsible for commercial administration and supplying some depot equipment.

The cars will be 19·8 m long, 4·1 m high and 2 950 mm wide, with stainless steel bodies deigned for lightness and high durability. There will be internal and external CCTV cameras, and two sets of air-conditioning units per car.

Line 6 will run on a 19·9 km north–south elevated alignment from Uttara North to Motijheel, with 16 stations. Construction is being jointly financed by the government (25%) and a loan from Japan International Co-operation Agency (75%).

A groundbreaking ceremony for the viaduct and nine stations being built under contracts CP-03 and CP-04 was held on August 2. Trial operation is planned to start by the end of 2019, with the full service following by the end of 2020.

Further metro lines are planned, and Kawasaki and Mitsubishi said they planned to work together to win future rolling stock orders.