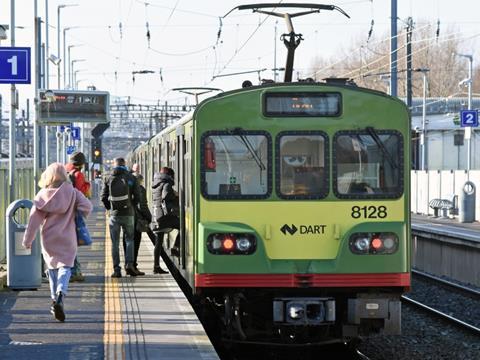 IRELAND: National railway Iarnród Éireann and the National Transport Authority have invited expressions of interest in a 10-year framework agreement covering the supply of between 250 and 600 vehicles for Dublin Area Rapid Transport suburban rail services.

Expansion of DART electric services to Maynooth, Drogheda and Hazelhatch forms part of the NTA’s Project Ireland 2040 programme and its 2016-35 transport strategy for the greater Dublin area.

Ireland’s 1 600 mm gauge network will require custom vehicles, and so a framework contract is planned to avoid the need to go back to the market to place future orders and go through new approvals procedures. A mix of four-car and eight-car units is envisaged, with the fleet to be maintained at a new depot on the Maynooth line.

NTA has already stipulated that any future IÉ trains should be electric, electric-battery, electro-diesel or diesel-battery hybrids. The planned electrification of the three commuter routes would increase the proportion of passenger-journeys made on electric trains from 42% to 75%. Following an assessment of options, IÉ has decided to extend the 1·5 kV DC electrification used by existing DART services. It would use 25 kV 50 Hz for any future main line electrification projects outside the Dublin commuter region with long-distance trains switching systems at the approach to the capital. This decision follows studies which concluded that retaining 1·5 kV DC offers simplicity and the ability to continue to use the existing DART EMU fleet. Potential rolling stock suppliers also indicated it would easier to charge onboard batteries from DC overhead.

As electrification is not envisaged before 2025, the initial order would include EMUs equipped with batteries for through working onto unwired routes. These could be converted to overhead-only operation in the future. The initial order is expected to be for 52 battery-equipped vehicles, while the remaining trains are likely to be electric only.

Expressions of interest are to be submitted by September 2. It is envisaged that five suppliers would be shortlisted to submit detailed proposals, with the contract worth an estimated €2bn to be awarded in Q3 2020. The contract would also include a Technical Services and Spares Supply Agreement running for up to 15 years from the delivery of the final vehicles.