Gdańsk tram purchase to be funded from late delivery fines 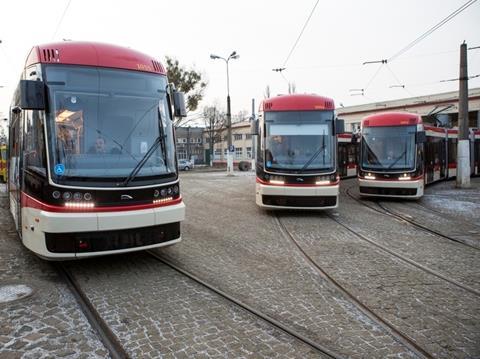 POLAND: Gdańsk tram operator GAiT is purchasing 15 more Jazz Duo trams from Pesa, the city authorities announced on April 25. The order forms an option on a contract signed in February 2018.

Due to arrive by the end of 2020, the trams from the option will be partly financed from fines paid by Pesa for late delivery of the initial batch from the base order. GAiT estimates that this will cover the cost of at least two trams.

The first five trams were due to be delivered by January 15, but Pesa now expects them to be delivered by the end of July; the remaining 10 vehicles from the base order are due to arrive by the end of November. Pesa is liable to pay a penalty on each of the initial five trams of 8 800 złoty for each day of delay, plus 5 500 złoty per day for the repair and maintenance kits.

The five-section 100% low-floor trams from the base order will be 29·7 m long with capacity for 206 passengers including 32 seated. Following consultation with drivers, a more ergonomic cab design will be adopted for the trams from the option, which will include not only a cup holder but also a drink cooler.