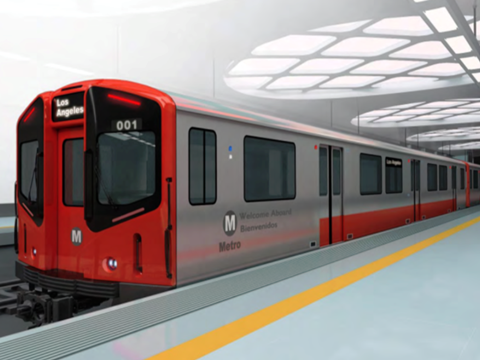 The Chinese supplier had been selected in December as preferred bidder for the new stock, which is needed for the opening of the 6·3 km Purple Line extension from Wilshire/Western to La Cienega in 2023. The extension will require an extra 34 cars, while the other 30 are intended to replace the oldest vehicles running on the Red Line.

Bodyshells are to be fabricated at CRRC’s Changchun plant in China, with final assembly taking place at the group’s new facility in Springfield, Massachussets, which has been established to assemble metro cars for Boston. Major components including the traction equipment, HVAC and lighting are to be manufactured at a new plant in the Los Angeles area, creating around 50 local jobs.

The first pre-series vehicle is expected to be delivered for testing in early 2020, with all 64 to be delivered by September 2021. The contract also includes five options totalling 218 additional cars which would take the total value to $647m. The deal is being funded through a combination of local and federal sources, including proceeds from the Measure R sales tax approved by voters to fund metro and light rail expansion.