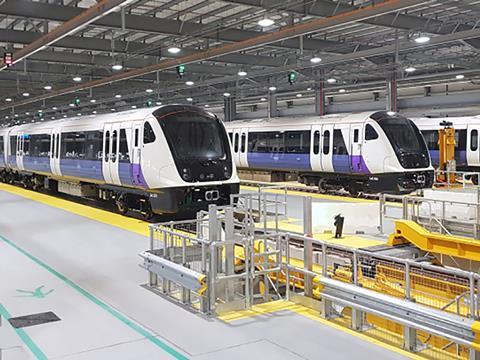 UK: Transport for London has awarded Bombardier Transportation a contract to supply a further five nine-car Class 345 Aventra electric multiple-units for use on the Elizabeth Line, taking its total order to 70 trainsets.

The order announced on March 27 includes an expansion of the existing train services agreement to cover the additional trainsets, which takes the total value of the contract signed on March 22 to £73m.

The extra vehicles will follow from the 585 Aventra cars which Bombardier’s Derby plant is already producing for the Elizabeth Line, and are scheduled to enter service by the end of 2019.

‘The additional trains will allow us to serve all the terminals at Heathrow Airport and provide an increased frequency when the line is fully open in December 2019’, said Mark Wild, TfL’s Managing Director for London Underground & the Elizabeth Line.

Bombardier Class 345 EMUs are currently in passenger service between London Liverpool Street and Shenfield, are being used for driver training on the Great Western lines and are undergoing testing in the Crossrail project’s central tunnel and on the Heathrow branch.