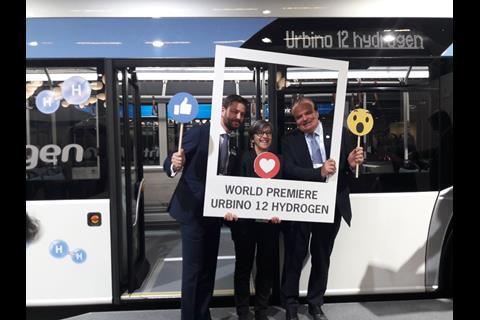 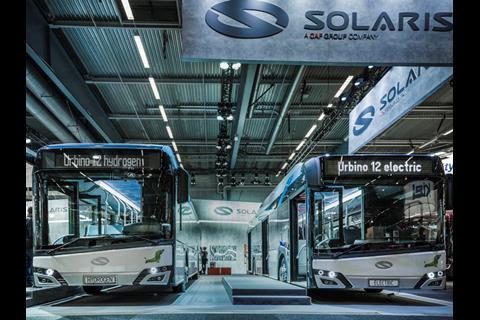 FRANCE: RATP is to test a hydrogen fuel cell bus in passenger service next year, after signing an agreement with manufacturer Solaris at the UITP Global Public Transport Summit 2019 on June 10.

RATP will test a bus over a 10-week period between April and June as part of a project to have a fully zero-emission bus fleet by 2025. The leased bus will be stabled at RATP’s bus centre in Thiais.

Solaris premiered the Urbino 12 hydrogen at the UITP exhibition in Stockholm. Two 125 kW electric motors are powered by 60 kW fuel cells, which are in turn fed by hydrogen stored in Type IV tanks at a pressure of 35·5 MPa. The five roof-mounted tanks have a total hydrogen capacity of 36·8 kg, which the manufacturer says enable the bus to run for up to 350 km before needing to refuel. Waste heat from the fuel cells is used to heat the interior via a CO2 heat pump.

The vehicle is also fitted with a small Solaris High Power traction battery to assist at times of high energy demand. The battery stores energy from regenerative braking and from hydrogen, and can also be charged through traditional plug-in charging at the depot.

The launch customer for the Urbino 12 hydrogen is SASA Bolzano. The contract for 12 vehicles signed last month includes eight years of service and maintenance.