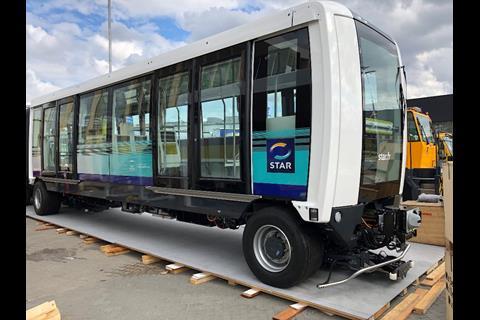 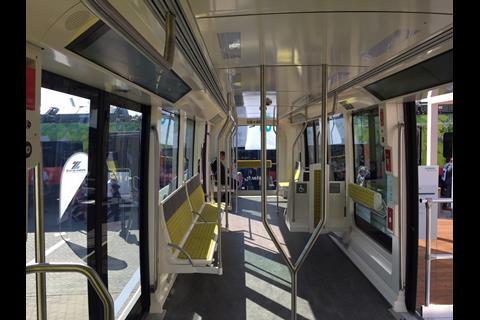 FRANCE: A spacious interior tailored to short hops is at the heart of the Cityval metro car being supplied to operate Line B of the automated light metro network in Rennes.

On display at the InnoTrans trade show in Berlin, the two-section Cityval car is one of 25 vehicles being supplied by Siemens as part of its turnkey contract for the development of Line B awarded in 2010. Line B will be 12·6 km long, running from Mermoz in the southwest to Champs Blancs in the northeast with 15 stations. It is planned to open in 2020, complementing Line A which opened in 2002 and also uses Siemens’ VAL technology.

The Cityval vehicle marks a significant update to the VAL automated light metro concept, which dates back to the opening of the world’s first driverless metro in Lille in the early 1980s. It has since found favour in lower-density cities and in the airport peoplemover market.

Rennes municipality has worked with French consultancy RCP Design Global to develop a specification for the Line B trainsets which meets its specific needs as a city, while also enabling Siemens to reinvigorate the VAL family. Since the order for Rennes was placed, Siemens has won follow-on orders from Bangkok and Frankfurt airport for the Cityval design.

Cityval is characterised by large windows and an abundance of standing space; RCP has developed folding seats that can also be used as perches. RCP also sought to develop an uncluttered interior making as much use as possible of the vehicle bodyshell rather than internal partitions.

Welding joins are not visible, and a walk-through gangway between the two sections is provided; this has been decorated in a bright green colour, updating the green livery used across Rennes’ public transport services. The doors are wider and the tyres larger than on previous VAL designs, RCP says.

RCP Founder Régine Charvet-Pello says that the VAL ‘absolutely cannot be compared’ to other modes such as trams however. ‘The tram is embedded in the cityscape’, she says, while ‘a VAL is much more like a private vehicle. It is a form of mass transit which at the same time is also pleasant, secure and comfortable.’

The consultancy has worked extensively on the aesthetic, sensory and engineering design of urban and suburban rail networks in France. It is currently involved in developing design specifications for the Grand Paris Express automated metro network in Ile-de-France and working on metro renewal projects in Lyon and Marseille.