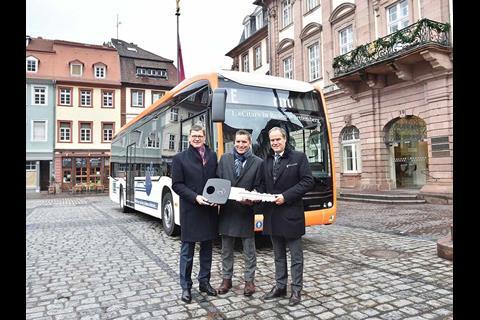 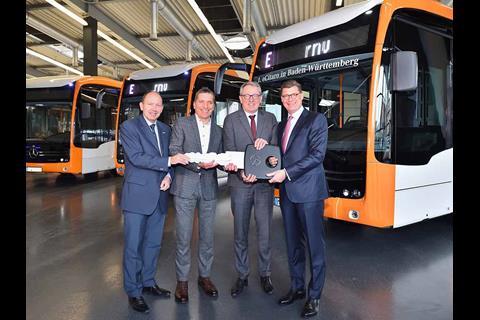 RNV is the launch customer for the eCitaro, having signed a memorandum of understanding with Daimler subsidiary EvoBus in 2017. As part of the agreement, the operator and supplier would exchange information about the performance of the buses in regular passenger operation.

One bus would operate on the 4 km Route 20 in Heidelberg, which runs from from the main railway station to Altstadt station via Seegarten and Karlsplatz, serving 12 stops. In the future, two electric buses are planned to operate on this route.

The other two buses would operate in Mannheim: one on a route from Käfertal station to the Franklin district via Wasserwerkstraße and the other between Platz der Freundschaft and the Taylor industrial estate.

Each bus is expected to cover around 200 km per day. Six lithium-ion battery modules on the roof and four at the rear of the bus have a total capacity of 243 kWh. These will be charged using plug-in chargers, including 150 kW chargers for top-up charging.

‘For us electromobility is the quintessence in modern, environmentally-friendly and sustainable drive system technology’, said RNV Technical Managing Director Martin in der Beek.