TEX Rail train on test at Dallas-Fort Worth International Airport 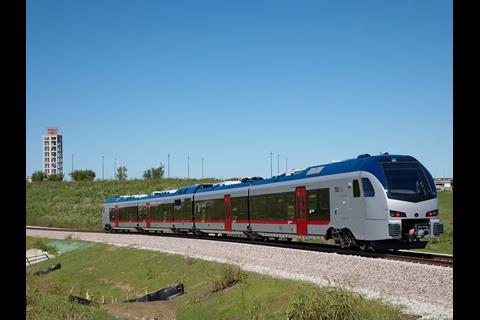 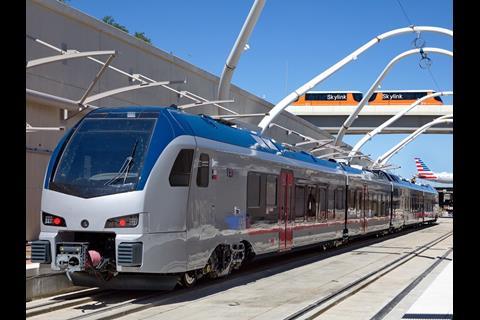 USA: The first of the Flirt trainsets which Stadler is supplying for the 43 km TEX Rail commuter route linking central Fort Worth with Dallas-Fort Worth International Airport has undergone dynamic testing at the airport.

Testing between Dallas Fort Worth Junction and DFW Airport Terminal B station was undertaken with support of the Federal Aviation Administration to verify any impact that future train operations might have on the airport’s ASR 9 radar tower.

This is to be followed by testing on the full route, which is scheduled for completion in December. Opening is planned for late 2018 or early 2019.

Fort Worth Transportation Authority placed the $100m order for the eight DMUs in June 2015. While Stadler had won previous contracts in the USA, this was the first US order for the Flirt family. It was also the first to include federal funding, and so be subject to Buy America regulations requiring 60% of the contract value to be sourced in the USA.

The aluminium bodyshells and bogies have been produced in Switzerland, with final assembly taking place in North Salt Lake, Utah.

The 130 km/h DMUs meet the Federal Railroad Administration’s alternative vehicle technology requirements for use on lines shared with freight trains.

They have two Deutz 520 kW diesel engines complying with EPA Tier 4 Final emission standards housed in a centre module. There are 224 seats with side tables and USB sockets, as well as an Americans with Disabilities Act compliant toilet.