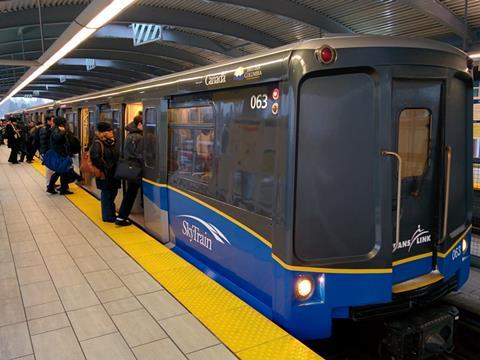 CANADA: The oldest SkyTrain cars on Vancouver’s automated metro network are to be replaced under a C$1·47bn upgrading and enhancement package unveiled on May 23.

‘Approximately 200’ new vehicles will be procured to replace the original 150 SkyTrain cars, which are nearing the end of their service life. The small-profile linear-motored ICTS Mark I vehicles were delivered by UTDC in three batches between 1984 and 1995. The larger fleet size is expected to increase peak capacity by more than 5 000 passenger spaces.

An additional rolling stock stabling facility is to be built, while the existing vehicle operations and maintenance centre will be modernised. Power supplies and train control systems will also be improved on both the original Expo Line and the later Millennium Line to support longer and more frequent trains.

The Canadian government is contributing C$493·3m from the C$28·7bn Public Transit Infrastructure stream within its 12-year Investing in Canada Plan, which has a total budget of C$180bn. British Columbia’s provincial government is providing C$579m and the remaining C$397·7m will be funded by local transport authority TransLink.

‘We are investing in the very backbone of the Lower Mainland's public transit system’, said Sajjan. ‘These upgrades will allow it to better absorb the growth in ridership, and help residents get to where they are going quicker and more comfortably. By investing in public transportation, we are reducing the number of vehicles on the road and helping to build a more sustainable future for Vancouver.’