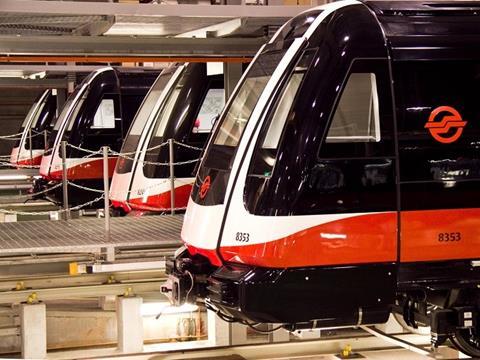 SINGAPORE: Tunnelling started on the Circle Line Stage 6 extension on July 25 with the launch of the tunnel boring machine at Keppel station.

The TBM will bore a tunnel to HarbourFront, and will be followed by two more, expected to be launched in September and October. The Land Transport Authority has also announced that it is purchasing 12 more trainsets from Alstom, which are to be delivered from 2024. These would increase capacity ahead of expected higher ridership once the extension opens. The order follows one for 11 Alstom trains last year.

Due to open in 2025, the 4 km section between HarbourFront and Marina Bay would complete the circular route. Work on the three stations, as well as expansion of the Kim Chuan Depot, began in 2017.

Alstom is supplying its Urbalis CBTC signalling for the extension, and the existing Circle Line route would have its signalling, communications and power supply upgraded.