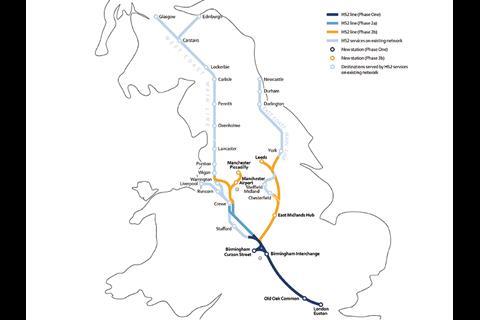 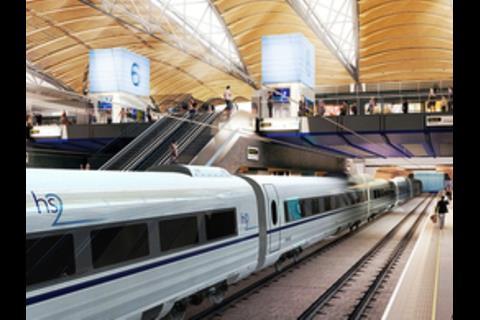 UK: Transport Secretary Chris Grayling issued a Command Paper on July 17 confirming the planned routes for the northern sections of High Speed 2, which would link London and Birmingham with Leeds and Manchester, including connections to the existing East Coast and West Coast main lines.

Upon completion, Phase 2b is expected to reduce journey times between Birmingham and Manchester from 1 h 28 min to 40 min, and from Leeds to Birmingham from 1 h 58 min to 49 min. Intermediate stations are planned at Toton, which would be served by local trains from Nottingham and Derby, and at Manchester Airport, subject to final agreement of a local funding contribution.

The Department for Transport has now confirmed the timeline for taking Phase 2b forward. The major milestones for the project are:

The government set out its initial preferred routes in 2013, and updated them in 2016. With the Transport Secretary now accepting six of the seven alignment changes set out in 2016, some significant amendments have been made to the initial proposed route. On the eastern branch, ‘conventional compatible’ HS2 trains will serve the existing Chesterfield and Sheffield stations via a 9·4 km spur between the HS2 trunk route and the Midland Main Line.

An alignment avoiding a tunnel beneath East Midlands Airport has also been selected, while the Phase 2b Hybrid Bill will include powers to be build a northern chord to allow trains from Sheffield to rejoin HS2 to reach Leeds and York.

On the western branch, HS2 Ltd has proposed relocating a planned rolling stock maintenance depot from Golborne to a site north of Crewe, while the planned tunnel approach to Manchester Piccadilly has also been amended to ensure the portal is located on railway land. Because of the planned depot relocation, a proposed east-to-north chord near Manchester Airport will no longer be built. The government hopes that this will mean a significant reduction in construction costs.

HS2 Ltd has also been asked to ensure the planning of Phase 2b includes provision for integration of the high speed line with planned enhancements to east-west rail links across northern England. Branded Northern Powerhouse Rail, these plans are being taken forward by Transport for the North, which is expected to become the UK’s first statutory sub-national transport authority later this year.

Among TfN’s aspirations is a 30 min journey time between Sheffield and Leeds, and faster journeys between Manchester and Liverpool, and these ambitions are to be supported by HS2 Phase 2b, the government says. Given the problems that Network Rail has encountered in electrifying the conventional network in recent years, DfT suggests that bi-mode trainsets ‘capable of operating at up to 225 km/h in electric mode’ could be used on HS2 infrastructure to support enhanced connectivity between northern cities.

The government says that the complete HS2 budget remains £55·7bn at 2015 prices, and the project has an overall benefit:cost ratio including wider economic factors of 2·3:1.