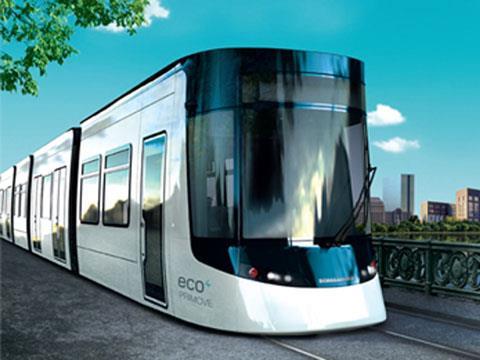 UK: Preferred bidders for three contracts to revitalise Britain's only surviving traditional tramway were selected by Blackpool council on May 6.

Bombardier Transportation has been chosen to supply 16 low-floor trams to the seaside resort, where they will operate alongside the existing vintage vehicles. Track upgrades and missing certain stops will provide a faster service with the aim of growing traffic.

Blackpool council Project Manager Paul Grocott said the emphasis has been on obtaining a standard European product requiring minimal adaptation to meet UK regulations. 'We don't want a bespoke vehicle', he told Railway Gazette International. The aim was to make the contract attractive to potential bidders, increasing competition and thus keeping costs down. 'This has been successful' said Grocott, although the contract value is not being released.

Part of Bombardier's Flexity 2 family, the trams will be 32·5 m long and 2·65 m wide, with five sections and three bogies. They will be built at the Bautzen plant in Germany, with the first due to arrive in Blackpool in May 2011 and enter passenger service by Easter 2012. Further details of the trams will be revealed at the UITP World Congress & Exhibition in Wien next month, for which Railway Gazette International is official media partner.

BAM Nuttall is preferred bidder for the replacement of 8 km of track by Easter 2012, while Volker Fitzpatrick has been chosen to build a £20m tram depot at Starr Gate.

The majority of the funding for the £100m revitalisation project is coming from the Department for Transport, which now has to approve the choice of preferred bidders and the business case. Contract signature is expected in June.