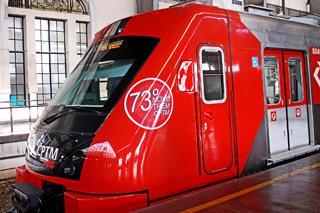 BRAZIL: São Paulo suburban operator CPTM has awarded CAF a four-year contract for the maintenance of eight suburban electric multiple-units which it supplied in 2011-12 for use on Line 10.

The work will be carried out by the Spanish company’s CAF Brazil subsidiary at the operator’s Lapa depot.