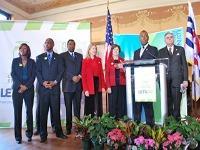 USA: Transportation Secretary Ray LaHood and Mayor Mark Mallory attended a groundbreaking ceremony on February 17 to mark the start of work on a tram line serving the centre of Cincinnati.

The 5∙8 km route with 17 stops will run from Findlay Market in the district of Over-the-Rhine, to the Banks redevelopment project in the Riverfront area. The streetcar will run on a pair of single tracks in adjacent streets, following Elm and Race between Over-the-Rhine and Central Parkway, and Walnut and Main from there to the Riverfront. The depot will be located near Findlay Market.

Advanced works include a four month project to move water mains on Elm Street at 12th Street.
Due to open in 2013, the Cincinnati Streetcar project is costed at $110m. The city received $25m from the federal Department of Transportation’s Urban Circulator Grant Programme in 2010, towards the cost of construction work. Another grant from the TIGER III programme is funding a short extension from Fifth Street to Second Street.

The project has been controversial, but attempts to cancel the scheme were rejected by voters in 2009 and 2011. Mayor Mallory said ‘today’s groundbreaking belongs to the thousands of Cincinnatians who have enthusiastically worked to make the Streetcar a reality. The Streetcar is another part of our efforts to build a better Cincinnati.’