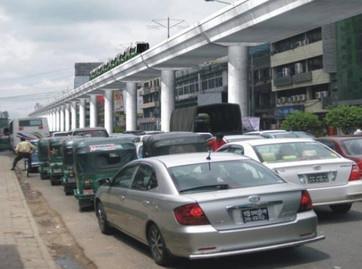 Hasina had previously laid the foundation stone for Line 6 on October 31 at 2013. Work is split into six civils and two railway systems packages. The project is being managed by the Communications Ministry’s Dhaka Transport Co-ordination Authority, and a consortium of Nippon Koei, Delhi Metro Rail Corp, Mott Macdonald and Development Design Consultants is acting as general consultant. Services would be operated by Dhaka Mass Transit Co.

The government is providing 53·9bn taka of the 219·85bn taka project cost, with the remainder coming from JICA under a 40-year soft loan agreement signed in 2013. JICA expects to disburse the first quarter of the loan this year.

The 20 km elevated north-south route will link Uttara North and Motijheel. There would be a depot beyond Uttara North at the northern end of the line. The line would be overhead electrified at 1·5 kV DC and all 16 stations would have platform edge doors.

A fleet of 24 six-car trainsets is to be procured; bids were due by June 15. The rolling stock would have a maximum speed of 100 km/h, giving an end-to-end journey time of 38 min. Peak headways of 5 min are envisaged.

Line 6 is the first of three planned lines. A feasibility studies for lines 1 and 5 is currently underway.