Don’t believe the hype about Hyperloop

Policymakers around the world have been beguiled by the prospects of Hyperloop technology providing a paradigm shift in inter-city transport, potentially at the expense of rail investment. However, Gareth Dennis sounds a note of caution about the technical and commercial hurdles facing this ‘fifth mode of transport’. 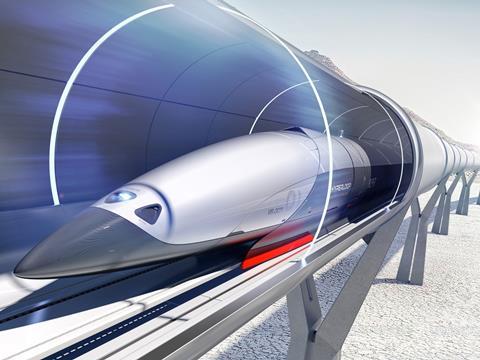 Gareth Dennis is a Permanent Way Engineer for an international design consultancy. Based in York, he leads the local section of his professional institution, as well as being a lecturer in track systems at the UK's National College for High Speed Rail.

The much-vaunted Hyperloop, sometimes described by its proponents as the ‘fifth mode of transport’, uses the premise of pods travelling through evacuated tubes to offer high speed inter-city transport. . The concept was first attributed to US-based technology entrepreneur Elon Musk, and independent backers are popping up across the globe, amid huge amounts of publicity.

On paper, the concept is a clever one, extrapolating Newton’s First Law to remove as much air resistance as possible to reduce the required motive force to achieve the desired speeds. The technology itself is not revolutionary, simply comprising a pod elevated and driven forwards by magnetic levitation in a tube pumped to a near-vacuum.

Some progress has been made by the various competing Hyperloop developers. Virgin Hyperloop One, for example, has built a 500 m ‘DevLoop’ test ring in the Nevada desert, where it has demonstrated the technological union of maglev and vacuum tube. Acceleration, top speed, the pressurised cabin environment and associated emergency arrangements are all very similar to those utilised in commercial air travel. But for all the attention lavished upon Hyperloop, there are fundamental problems that must be overcome before any commercial application is realistic.

As with conventional railway alignments, Hyperloop will rotate the plane of its guideway as curvature increases to reduce the forces on passengers. Yet it seems unlikely that a guideway could be tilted enough to avoid a near-straight alignment, with inertial forces on passengers being comparable to those in a jet aircraft. This in turn is likely to mean the tubes would be underground in most applications.

Switches pose another huge technological hurdle. Indeed, even after almost 200 years of railway development, these components still go wrong quite regularly. Passing trains impart huge forces on the underlying track, resulting in rapid degradation of the steelwork. The mechanism that moves the switch can be complex and cumbersome, while managing detection and the interface with the railway control system can also be challenging. In this context, it is fanciful to think Hyperloop developers could overcome these complex requirements first time around, not to mention at six or seven times the operating speed of the fastest steel wheel railway.

The vacuum tube concept also throws up some technical gremlins. Thermal expansion effects on the tubes can be managed by using materials with a reduced thermal expansion coefficient and by constructing expansion joints between each tube segment. However, these expansion joints would have to be strong enough to withstand the pressures from the vacuum within, increasing their cost greatly.

In an emergency, or in the case of a pump failure, the tube would have to be returned to atmospheric pressure: all this requires is a valve controlling the ingress of air. The problems start when the vacuum needs to be restored. With regular airlocks, you could not run a pod at speed from a vacuum into a section at atmospheric pressure. At 1 000 km/h, this would be akin to driving a car into a concrete block.

But if pods have to sit and wait for the correct pressure conditions to be achieved mid-service, delays could be considerable: the Hyperloop One test tube needs 4 h to return to a vacuum over a 500 m alignment. Undoubtedly there will be more powerful pumps in any commercial specification, but this is still technology requiring radical development.

Japan’s Chuo Shinkansen maglev is likely to use approximately three times more energy per seat energy than steel wheel high speed rail. While Hyperloop's vacuum tubes will remove almost all aerodynamic friction, reducing the motive power needed to reach and sustain high speed, there will be almost no aerodynamic drag, increasing the power required to slow the pods down. The likely power consumption of the pumps maintaining the vacuum conditions must be considered on top.

Yet it is passenger capacity which is arguably the most fundamental challenge. Using the UK’s planned High Speed 2 as a benchmark, high speed rail capacity can be nearly 20 000 passengers per hour per direction, assuming 18 trains/h over a double track alignment, each with 1 100 seats. If a Hyperloop pod had 50 seats for example, then to match HS2’s capacity 400 pods would need to depart every hour at a 9 sec headway. Assuming the same number of seconds to alight from a Hyperloop pod as a train, 23 tubes would be needed to match HS2’s throughput.

None of this is to dismiss entirely Hyperloop’s prospects. Indeed, the eager and exceptional minds in organisations like VHO will doubtless continue their quest for answers. But we should not yet claim that Hyperloop could replace steel wheel rail, which is far from the outdated mode some would assert. For the foreseeable future, Hyperloop is likely to remain a technological experiment meriting private backing, rather than public funding.